Minister Al-Kaabi: We Must Be Realistic And Fair in Our Quest For Energy Transition 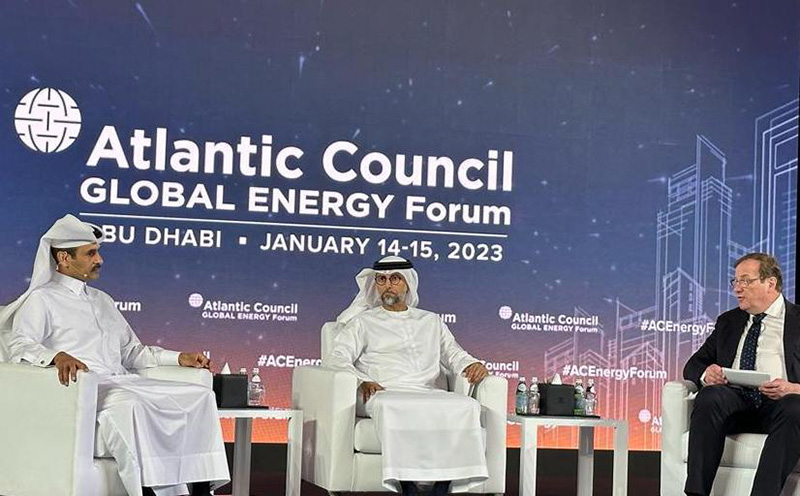 DOHA, Qatar • 14 January 2023 – Mr. Saad Sherida Al-Kaabi, the Minister of State for Energy Affairs, the President and CEO of QatarEnergy, said the world can’t solve its environmental and climate change problems without being realistic about the solution.
His remarks came during an opening panel discussion of the Global Energy Forum, which was held in Abu Dhabi with the participation of Suhail Al-Mazrouei, the Minister of Energy and Infrastructure of the United Arab Emirates.
Minister Al-Kaabi also highlighted some of the challenges that face stable energy markets and prices, including geopolitical tensions and turmoil, lack of investment in new energy sources, and meeting the financial requirements for investments that will help achieve the environmental ambitions, adding that making unachievable plans and promises will take us across the finish line. Minister Al-Kaabi also stressed that, so far, global “net zero” ambitions have not been supported with an actual plan beyond setting expectations by a certain date.
Urging the need for fairness with regards to investments in oil and gas, His Excellency said it is very unfair for some in the West to say African countries should not invest in oil and gas and to be green when it was important for their economies, national growth, and prosperity, as well as for the oil-based solutions and everyday products they need, and which renewables cannot produce or manufacture.
Minister Al-Kaabi stressed during his remarks that natural gas is not a transition fuel but rather a destination fuel. He also highlighted the need for immediate and effective action against burning coal, which is the most serious pollutant. “30% of the world’s electricity is generated by burning coal, which is being used in record levels today by the same countries which have called to stop coal burning. Still, we hear the calls demonizing oil and gas but not coal – the biggest polluter on the planet.”
Speaking on the future of oil & gas and the impact of the fluctuating market, Mr. Al-Kaabi said: “Prices are a factor of supply and demand. Last year, we have seen spikes in energy prices that began well ahead of the Ukraine crisis. This was clearly due to lack of supply driven by lack of investments, which shied away as a result of a bigger push for green that did not have a realistic plan for an effective transition. As for 2023, it started with lower prices helped by warmer weather in Europe, but the challenge is when the time comes to replenish their storage capacities. There won’t be any new gas volumes coming into the markets for another 2-4 years, which can be a cause for future volatility.”
Minister of State for Energy Affairs, the President and CEO of QatarEnergy, also gave an overview of Qatar’s efforts to help meet global demand saying: “Today, we are producing 77 million tons per annum of LNG to which we will add another 65 million in new gas production projects. Our efforts continue to bring more gas to the market to help humanity with its energy needs especially when we know that there are one billion people who are deprived of the basic electricity we all enjoy today.”
Minister Al-Kaabi concluded his remarks by urging governments and legislators to promote additional gas investments in order to encourage and promote the development of future supplies.
The Atlantic Council Global Energy Forum convenes the world’s top energy and foreign policy decision makers annually to set the global energy agenda for the year ahead and examine the longer-term geopolitical and geo-economic implications of the changing energy system.