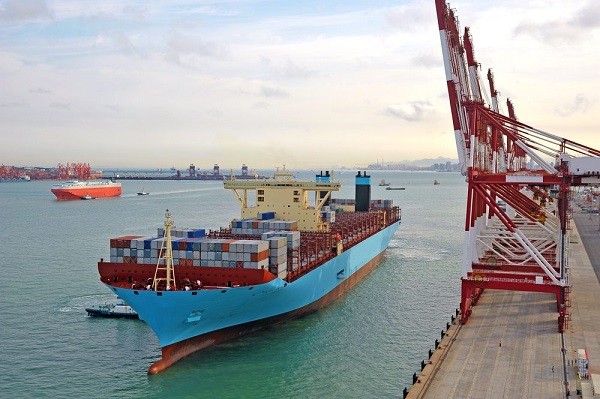 Maersk is in the process of developing a carbon-free green methanol-powered fleet of containerships, now standing at 19 ships with deliveries planned primarily in 2024 and 2025, and has been busy lining up partnerships for the green methanol fuel supply to power the fleet.

Maersk recently announced its eighth such partnership with U.S.-based project developer Carbon Sink, which is developing its first facility co-located at the Red River Energy bio-ethanol plant in Rosholt, South Dakota. Back in March, Maersk announced partnerships with six energy companies to jump-start green methanol production with the intent of sourcing at least 730,000 metric per year of the fuel by end of 2025. That amount would be enough to power approximately 12 ships. A seventh partnership with Chinese bioenergy enterprise Debo was announced in August covering an additional 200,000 tonnes of per year of green bio-methanol starting in fall 2024.

“Securing green fuels at scale in this decade is critical in our fleet decarbonisation efforts,” said Berit Hinnemann, Head of Green Fuels Sourcing at Maersk, upon the partnership announcement with Carbon Sink.

OQ announced in September that it has started production of ammonia at its new plant Dhofar Governorate, which could potentially be transitioned to operate on solar and wind energy. The $463 million plant project has a designed capacity of 1,000 metric tonnes per day (MTPD) of ammonia and is fully integrated with existing 1 million metric tons per year capacity methanol plant already located at the site. Liquid ammonia from the plant is shipped via Salalah Port, which has an abundance of solar and wind resources. The new ammonia plant has also been designed to retain the hydrogen-rich purge gas generated by the methanol plant as feedstock for the ammonia plant.