Methanol as an alternative fuel for container vessels 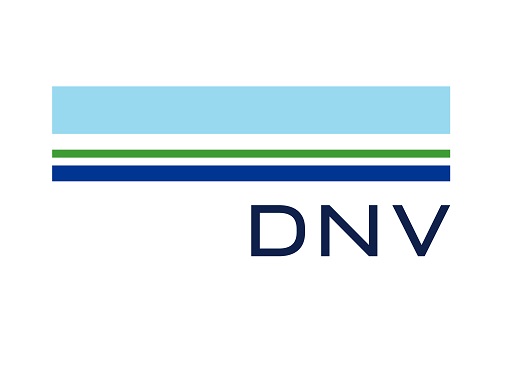 DNV has added a new chapter to its document “Alternative Fuels for Containerships” exploring methanol as a potential ship fuel in light of the IMO decarbonization goals. The in-depth study describes all applicable regulatory and design requirements.

Methanol holds significant potential as a future ship fuel and has recently emerged as a major topic in the discussion about the IMO decarbonization goals and alternative ship fuels. Knowing what future fuel to build for is one of the biggest challenges for shipowners as emission limits get tighter.

Regulations for using methanol as fuel are available
A key factor in the equation is the regulatory landscape: owners are unable to plan newbuilds for an alternative fuel until IMO and other regulatory bodies have defined applicable rules and requirements. The new IMO interim guidelines for ships using methyl or ethyl alcohol as fuel, MSC.1/Circ.1621, along with the IMO IGF Code for ships using low-flashpoint fuels and DNV’s mandatory class rules for methanol-powered ships, now open the doors for investing in methanol-fuelled ships. “The available regulatory framework now provides a solid basis for designing, building and operating ships powered by methyl or ethyl alcohol,” says Jan-Olaf Probst, Executive Vice President Business Development at DNV.

Alternative Fuels paper provides impartial decision support
In addition to its class rules, DNV publishes regular updates to its document “Alternative Fuels for Containerships”, which aims to provide neutral, fact-based, scientifically sound decision support for newbuilding projects. The document’s introductory sections explain the greenhouse gas (GHG) challenge, the IMO regulatory activities and the current market situation, followed by a comprehensive chapter about LNG as a ship fuel and its technical implications. The latest chapter examines the potential of methanol as a future alternative fuel for ships.

The new chapter of the #DNV Alternative Fuels document provides comprehensive guidance on ship design arrangements, containment concepts, certification and training, essential steps before signing a contract, and cost considerations in the context of carbon trading. A list of relevant DNV and IMO rules and guidance documents including brief descriptions completes the discussion of methanol as a ship fuel.

Comparatively simple design requirements on board
“The requirements for methanol are much less complex than those for LNG,” Probst explains. “Methanol is non-cryogenic, liquid at ambient temperatures, and does not require refrigeration or specific and expensive materials for tanks and pipes. Appropriate storage and handling technologies and expertise exist, and bunkering would be comparatively easy to implement.”

Methanol tanks may be integrated into the hull structure but require more space on board than LNG or heavy fuel oil (HFO) for a given trading distance, the DNV expert points out. “In most current engines methanol requires a pilot fuel for efficient burning, so diesel fuel must be carried on board as well, doubling as fall-back fuel too.”

Methanol fuel production technology is mature
Methanol, the most simple alcohol, is one of the top five chemical commodities shipped around the world. Factories in many countries are producing large quantities from fossil sources for use in a multitude of industrial applications. However, to cut GHG emissions, sufficient quantities of green methanol will be required eventually.

The production technology exists and many different feedstocks can be used to produce “green” methanol, including organic waste from agricultural and domestic sources or the forestry industry, or even atmospheric gases. The DNV Alternative Fuels document details the sourcing and production streams for green, blue and grey methanol. Market introduction of green methanol is expected to begin in 2024/25, albeit in small quantities initially. “But in essence,” says Probst, “any port location around the world with methanol terminals and oil bunkering facilities could be modified with only minor investments to offer methanol as ship fuel.”

Engines and generators for methanol as fuel are in operation
Main engines and generators for methanol are in operation on a few smaller ships, he points out. More engine types are currently under development. Methanol forms carbon dioxide and water when burnt, but noxious emissions from burning fossil-derived methanol in ship engines are much lower than those of HFO. However, the greenhouse gas emissions are about twice as high as those from natural gas. Carbon emissions from green methanol would be considered as climate-neutral because combustion would not add more CO2 to the environment than had previously been taken from it. Capturing the emitted CO2 for reuse in the production of green fuels could further improve the carbon balance.

Properties to consider for efficient operations
One of the limiting factors for the use of methanol as ship fuel is its lower energy content per volume of 18.2 MJ/l, says Jan-Olaf Probst. “Methanol requires fuel tanks approximately 2.5 times the size of HFO tanks for the same energy content, or 1.3 times larger than equivalent LNG tanks. This has consequences for the spatial arrangements on board and the trading range of methanol-powered vessels.” DNV believes that because of its comparatively simple engineering and design requirements, methanol is likely to be adopted mainly by smaller ships, at least initially, says Probst.

Recommended safety measures on board
With a flashpoint of 11°C to 12°C, methanol is flammable and evaporates easily. It is also indirectly toxic. “The new methanol chapter in the DNV document explains the necessary safety and zoning considerations extensively,” Probst says. “These are based on the four IMO-defined elements of a safety concept for methanol-fuelled vessels: segregation – double barriers – leakage detection – automatic isolation of leakages. The chapter addresses each of these items specifically.” 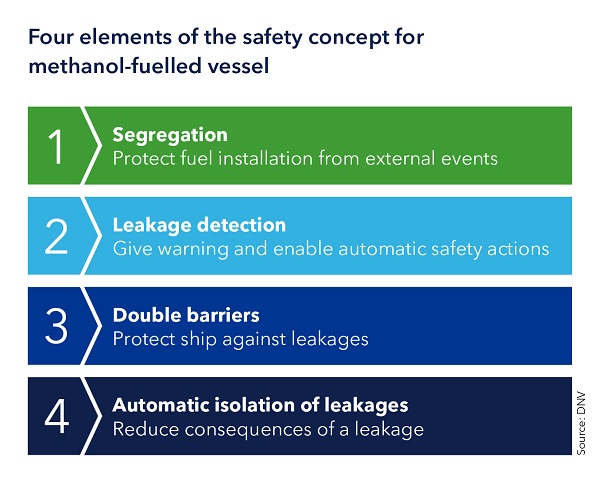 Fuel cells as an attractive option
“Methanol is also well-suited for fuel cell applications on board, which represent an additional opportunity to reduce a vessel’s carbon footprint. For example, replacing a generator set with a fuel cell system could provide enough electricity for port stays. As fuel cells become more compact, efficient and powerful, more and larger ships will be able to use this option profitably. Plus, a methanol-fuelled ship will not have to carry an additional, third fuel for its fuel cells.” The DNV Alternative Fuels document includes an explanatory section about fuel cell technology, Probst adds.

Investment costs for methanol systems
The additional capital expenditure (CAPEX) for installing a methanol system on board a vessel – including engines, fuel tanks, piping etc. – is slightly higher than for a conventional low-sulphur HFO-burning ship and roughly one third of the additional costs associated with LNG. Whether or not the methanol fuel is “green” is irrelevant for the storage, processing equipment and engines. Only small modifications or adjustments are necessary when switching to green methanol. Jan-Olaf Probst puts it in a nutshell: “In terms of long-term compliance with the IMO decarbonization trajectory, investing in methanol-ready ships is low-risk.”

A feasible option for longer compliance towards 2050
Methanol is a promising and feasible alternative fuel for containerships with a clear potential pathway towards a future carbon-neutral supply, the new chapter concludes. “Of all the alternative fuels currently being discussed, methanol requires the lowest extra capital investment compared to a conventional HFO-powered vessel of the same size and type, with all relevant parameters factored in,” stresses Probst, adding: “A methanol-fuelled ship will remain compliant with the IMO decarbonization trajectory towards 2050 for a longer time than a HFO vessel before having to switch to green fuel. In short, methanol is a trustworthy option.”

The next chapter of the Alternative Fuels document will address ammonia and is expected to be released in 2024 once IMO passes the relevant guidelines.