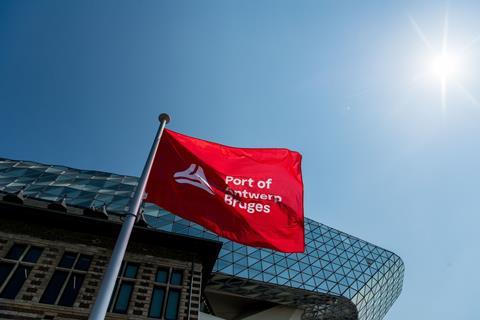 The conversion of a Port of Antwerp-Bruges tug to methanol has officially been launched at the beginning of this week with the first engine installed on Monday, November 21.

The second dual-fuel engine is set to be installed next week enabling the vessel to run both on methanol and conventional fuels, according to a recent update from the port authority.

The engine conversion was carried out by Anglo Belgian Corporation, which will also be in charge of installing the methanol tanks and pipes.

The project is funded by the European research and innovation program Horizon 2020 and aside from the Port of Antwerp, which is supplying the tugboat, it includes Belgian engineering company Multi, which carried out the feasibility study for the project, Swedish shipbuilder Scandinaos, which designed the vessel’s modifications, and the German company Heinzmann which is adapting the injectors.

The Methatug project has been described as the first of its kind and it is part of the port’s sustainability efforts. Last month, the port also welcomed its hydrogen-powered tug the Hydrotug 1.

The tugboat was built at Armón Shipyards in Navia Spain and it arrived in the port of Ostend on 27 October, where it will be fitted with a hydrogen system. Following the installation and testing, the goal is to have the Hydrotug 1 fully operational in Antwerp in the first quarter of 2023.

Antwerp-based Compagnie Maritime Belge (CMB) has been hired for the construction of the Hydrotug, which will be driven by combustion engines that burn hydrogen in combination with diesel.

The port of Antwerp has integrated LNG into its bunkering market in the past few years. By 2025, it aims to become a fully-fledged multi-fuel port, in which seagoing and inland vessels will be able to bunker, not only conventional fuels, but also low-carbon alternatives such as methanol, hydrogen or electricity.