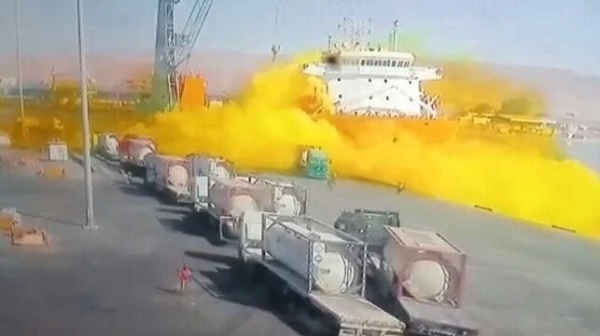 Thirteen people have died and 251 were injured during a toxic gas leak from a storage tank at Jordan’s Aqaba port, on June 27.

The leak came after a cable lifting a tank filled with 25 tonnes of chlorine snapped, sending the container crashing down. As a result, city health authorities advised residents to close their windows and stay in their homes.

According to a former head of the company that operates the port, a vessel had been waiting to load almost 20 containers of liquified gas “containing a very high percentage of chlorine”.

The injured were transported to two state hospitals, one private facility and a field hospital. Aqaba’s health director, Jamal Obeidat, said hospitals were full and the injured people were in “medium to critical condition”.

Jordan’s Aqaba grain silos stopped work to allow inspection of its grains and for any signs of contamination, but maritime traffic at Aqaba ports continues.

There were no vessels unloading any grains cargo at the time of the incident, they added.

The Jordanian prime minister, Bisher al-Khasawneh formed an investigation team into the incident, chaired by the interior minister.