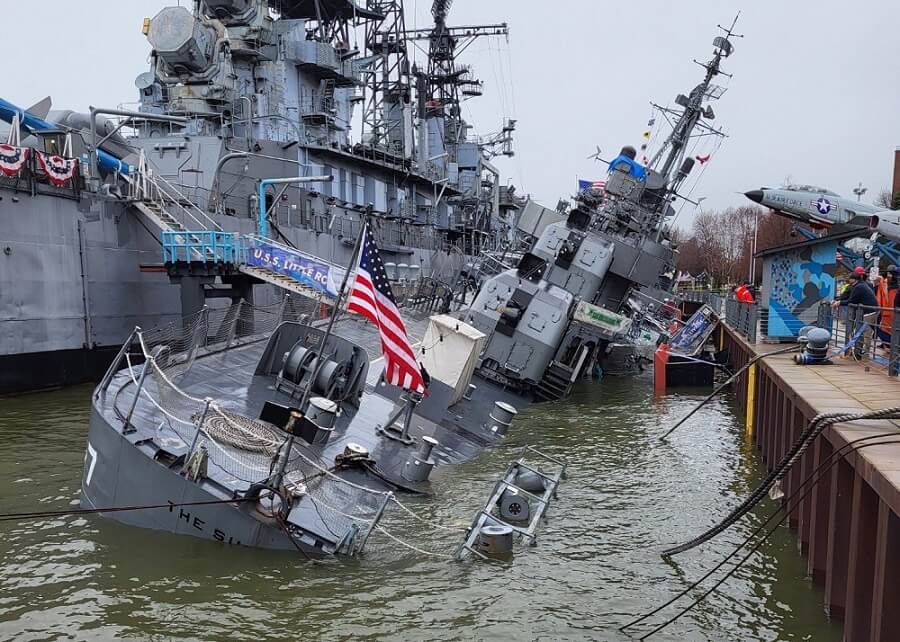 The decorated U.S. Navy destroyer-turned museum ship USS The Sullivans partially sank at its pier on Wednesday at the Buffalo Naval Park in Buffalo, New York.

The USS The Sullivans is owned and maintained as a museum ship by Buffalo and Erie County Naval & Military Park, the largest inland Naval Park in the United States located in Buffalo, New York.

The USS The Sullivans is one of only four Fletcher-class of destroyers in the world and the first ship in the U.S. Navy to be named for more than one person. The Fletcher-class destroyers were the largest and most important class of U.S. Destroyers used in World War II.

Named after the five brothers from Waterloo, Iowa, USS The Sullivans was commissioned in 1943 and earned numerous battle stars for its roles in WWII’s Pacific War and the Korean War, before its decommissioning in 1965.

A statement from the Buffalo Naval Park said all four ships at the park have been closed to the public as they respond to the incident.

“Yesterday, a serious hull breach occurred aft of midship on the starboard side. Our crew has been monitoring the ship all night and morning and are working with marine engineers and members of BIDCO Marine Group, the Buffalo Fire Department, Buffalo Police Department, Homeland Security, and Coast Guard to assess the problem, minimize damage, and remove water from the ship,” the organization said in a Facebook post.

“For over a year, we have been working hard to preserve USS The Sullivans and that work continues today and into the future. We are grateful for your continued support of this historic ship and of the Buffalo and Erie County Naval & Military Park.”