EMSA overview of marine casualties: 21 lost ships and 60 fatalities in 2019 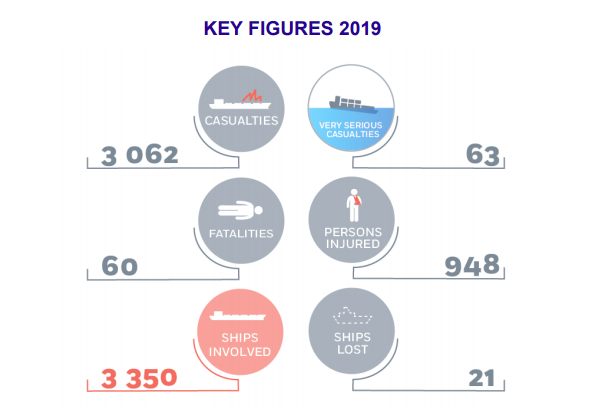 The total number of occurrences stored in the EMCIP database has grown to 19,500 over 2014-2019. This represents an average of 3,236 marine casualties or incidents per year over the period.   The EMSA report finds: "The year 2019 appeared to have been a positive year considering the improvement or stabilisation of some indicators, such as the number of ships lost, fatalities and injuries".

Distribution of ships involved b main category / Credit: EMSA[/caption] Per cause of incidents Accidents of navigational nature, such as contacts, grounding/stranding and collision encountered for 44% of all occurrences related to the ship. It was however noted that the main type of accident to a ship was the loss of propulsion power, that counted for 21.8%. Regarding occurrences to person(s), 37% were attributed to slipping, stumbling and falling of persons. Among the falls, 10% were fall overboard. [caption id="attachment_123831" align="aligncenter" width="970"]

Distribution of casualty events with a ship / Credit: EMSA[/caption] Per location of incident The departure phase appeared to be the safest phase of a voyage and the en route portion the most unsafe. It was noted that half of the casualties occurred in internal waters, more precisely in port areas. [caption id="attachment_123827" align="aligncenter" width="897"]