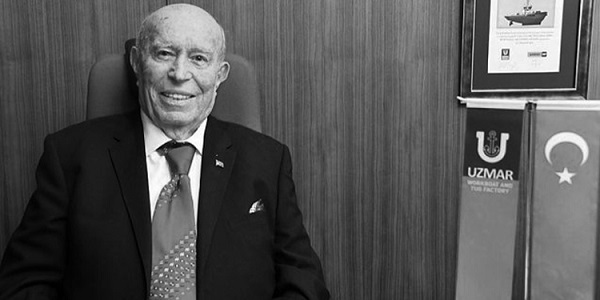 A much honored Turkish maritime figure with many lifetime achievement awards, Uzmar founder and late president Captain Altay Altuğ has passed away at the age of 96.

Referred to as “Father of Mariners” in Turkey, Captain Altuğ had achieved greater prominence on the international stage and maintained an active involvement in the business through to the end of his life as honorary president.

A graduate of the Istanbul Technical University, he worked on passenger and cargo ships for the Turkish Maritime Corporation until 1961, after which he became a harbor pilot in Izmir Port, and was ultimately promoted to Izmir Port chief Pilot. In 1963, he established the first modern pilot station in Pasaport, Izmir – the second port pilot radio station in Turkey after Istanbul – on a floating pontoon complete with VHF radio communication facilities. He also played an important role in establishing pilotage services at Izmir Aliaga refinery in the early 1970’s.

He retired in 1979, and started his own business with a vision to offer the first private sector pilotage services in Turkey; in 1983 he began rendering pilotage services at the Akcansa Canakkale cement factory terminal.

In 1992, he established Uzmar Shipping Ltd. a maritime company with pilotage, towage and salvage services, which was licensed by the Ministry of Transport, Maritime and Communication to act as the authorized pilotage and towage organization in the Nemrut Bay/Aliaga region.

In 1996, Capt Altuğ established a shipyard in Kosbas Kocaeli Free Zone, which he proudly named the “Workboat and Tug Factory”, and started to custom build tugs and other workboats, both for his in-house operational needs, and also for wider international market demands.

Uzmar, now world renowned for its tugs, is proud to be passing this legacy to generations ahead.