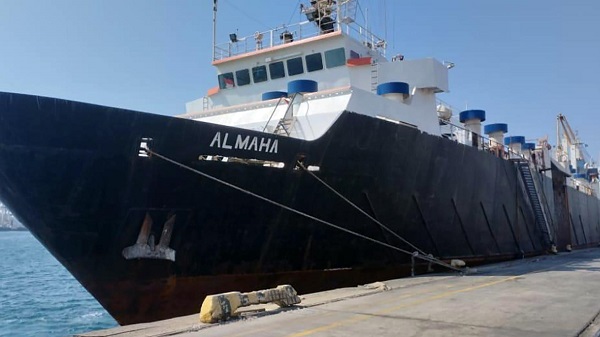 The Tanzanian flag has ducked its responsibilities to this seafarer and has replied only once with a holding response to the International Transport Workers’ Federation’s (ITF) many queries.

Do you remember what you were doing 10 years ago? In 2012, you may have been buying a brand-new iPhone 5. Or watching the London Olympics on the TV. Or reading in the news about the cruise ship Costa Concordia running aground off Italy.

Abdul Naser Saleh knows what he was doing. On 20 September 2012, he was taking a job as an engineer on the Al Maha (IMO 7721146). Ten years later, he’s still stuck on board, currently at the port of Jeddah in the Kingdom of Saudi Arabia. For the last seven of those years, he has received no pay. He has been tricked and cajoled by the owners into remaining at his post while other crew members have come and gone, while most of the others have received their rightful pay.

“The ITF is extremely concerned about Abdul Naser Saleh,” said Mohamed Arrachedi, ITF Flags of Convenience Network Coordinator for the Arab World and Iran. “He has been unable to support his family. He has been unable even to see some of his children. He has been treated as a slave. He must be paid what he is owed and allowed to return home without delay.”

Wages agreed but never paid
Saleh is a Syrian national with family both in Egypt and Sudan. He has been able to visit his children in Sudan when the ship was berthed there for an extended period. But he has not been able to visit Egypt since he boarded the Al Maha in 2012.

“I have asked for my pay but received only threats,” Saleh said speaking in Arabic to Arrachedi. “The original owner died and when his son took over, he agreed to pay the sum of USD $140,000 in back wages. He even signed a document, But the pay never arrived.”

In addition to Saleh’s extreme case, there are another nine Syrian seafarers on the ship, none of whom has been paid since they joined as crew on 24 July 2022. The ITF is also pursuing the owners for the urgent payment of their wages.

The ship is currently owned by Abalkhail Marine Navigation and operates out of Jeddah. It was built in 1979 as a RO-RO ferry but currently operates as a cargo ship. It is registered under the flag of Tanzania. The ITF has written to the owners, the Saudi Arabian maritime authorities and the Flag state asking that Saleh be paid what he is owed and repatriated to either Sudan or Egypt.

The Saudis have inspected the ship and are investigating the situation but, to date, things are not yet resolved. The seafarer is now without an employment contract with the owners, but as Arrachedi points out, if he is working on a ship this should be impossible and is, in itself, a transgression of international maritime law. The Tanzanian authorities have merely replied with a holding email saying they are looking into the case. In the meantime, Saleh’s family has somehow to survive without his financial support.

Under the UN International Labour Organization’s (ILO) Maritime Labour Convention (MLC), which Tanzania has ratified (but Saudi Arabia has not), a ship’s owners have to pay a minimum wage at least monthly and fund repatriation costs at the end of a seafarer’s contract. If a seafarer has been unpaid for more than two months then the ship is technically considered abandoned. This is the situation with the Al Maha.

The ITF has followed up its requests with further emails but no satisfactory answer has been received from any party.

“The situation is very bad,” Saleh tells Arrachedi. “My family has only survived with the help of friends and by building up debt. They rely on me and I work hard — I should be able to support them. But I cannot.”

Only Saleh has been on the ship so long. Other crew members have come and gone. To rub salt into his wounds, a group of six Sudanese seafarers was recently discharged and paid the two-months wages owed to them. Other Sudanese former crew members are believed to be taking legal action against the owners.

How can this have happened?
International law theoretically protects seafarers like Abdul Naser Saleh from being exploited this way. But there is a serious loophole. Although they often operate in international waters, ships must be registered with a single country and that country, the so-called Flag state, is legally responsible for ensuring the ship’s owners meet certain basic standards on safety and crew welfare. The MLC is designed to ensure a level playing field so the ships around the world meet the same standards on how seafarers are treated.

The problem is that international ship registries are funded through fees charged to the ship owners. Meeting rigorous safety and welfare standards costs their ‘customers’ money and so the registries have no incentive to enforce the law.

“At the grubbier end of the shipping industry, it’s like the police are being paid by the criminals,” said Steve Trowsdale, the ITF’s Inspectorate Coordinator. “What we see is ship owners who want to evade their responsibilities, selecting Flag states they know will take little or no interest in enforcing standards. That saves them money but means crews find themselves on inadequate vessels, uncertain about how much and when they might be paid. Abdul Naser Saleh’s story is an extreme example but, unfortunately, cases like his are all too common.”

The Al Maha is currently registered with Tanzania (Zanzibar), widely regarded as one of the worst offenders. Under the Paris Memorandum of Understanding (MoU), ports in Europe and along the Atlantic coast of North America keep records of ship inspections. Currently, 11 ships registered in Tanzania are banned from these ports altogether because of deficiencies. For a long time, Tanzania has been on the Paris MoU black list, warning port inspectors that its ships are among those at highest risk of failing to meet standards. It was recently upgraded to the grey list, meaning ships it registers are still considered a risk but it is improving from being among the very worst.

The damage to Tanzania’s reputation
In January 2018, then president of Tanzania, John Magufuli, suspended the country’s open registry after a series of high-profile criminal cases involving ships flying its flag. The Tanzanian-flagged cargo ship Andromeda (IMO 7614666) was discovered by the Greek coastguard smuggling explosives to Libya. Around the same time, the Tanzanian-flagged oil tanker Kaluba (now the Northom IMO 6828753) was apprehended off the Dominican Republic smuggling more than a tonne of cocaine.

There were a host of other cases where ship operators were abusing Tanzania’s slip-shod law enforcement (and such cases persist). “We cannot allow the name of our country to be tarnished by individuals pursuing their selfish interests,” President Magufuli said at the time.

However, Tanzania is apparently back to registering foreign-owned ships. The Al Maha, whose chief engineer has been unpaid for seven years, was re-registered in Tanzania for a four-year period as recently as December 2021.

“I’m disappointed that Tanzania doesn't feel it needs to do anything in response to continuous abandonment problems with ships flying its flag,” said Trowsdale. “They are concerned for their reputation over stories about smuggling, but seem to show no concern for human rights abuses. There were six cases of abandonment for Tanzanian flagged vessels  in 2020, four in 2021, and five so far in 2022.”

Whether or not its current leaders care to repair Tanzania’s reputation on the high seas, the effective regulation of ship owners remains problematic. Tanzania was formed by the merger of two newly independent countries in the 1960s. Tanganyika on mainland Africa joined with the islands of Zanzibar just off its coast. However, Zanzibar remains semi-autonomous. This history means the country has two ships’ registries. Mainland Tanzania has a closed registry (it only registers ships of Tanzanian ownership, largely crewed by Tanzanians) while Zanzibar has an international registry open to any ship operator prepared to pay the fee.

The Republic of Tanzania has ratified conventions such as the MLC, but it is the semi-autonomous region of Zanzibar which operates the open registry under the Zanzibar Maritime Authority. Communication between the two seems limited and that makes effective enforcement impossible. Research from the World Maritime University in Sweden recommends that Tanzania clarifies its laws in this area before it can hope to have an effective maritime administration.

“As in this case, it is ITF’s experience that the Tanzanian Flag does not take action when it receives requests relating to seafarer welfare, despite its commitment to the MLC,” said Trowsdale. “Our view is that a country should not operate an open registry unless it has the capacity to enforce basic labour rules on the ships it registers. A case like that of Abdul Naser Saleh would never have happened were it not for the Flag of Convenience (FOC) system. We call on Tanzania, and all FOCs, to live up to their responsibilities.”

The 1982 UN Convention on the Law of the Sea says there must be a genuine link between a ship owner and the country where the ship is registered. This is also the ITF’s policy. The practice of some countries to operate open registers (Flags of Convenience) where they register a ship for a fee but do little or nothing to meet their obligations under international law, has caused untold suffering to seafarers. Until the system is changed, ship’s crews will continue to be exploited by unscrupulous operators.