Foreship is marking its 20th anniversary with a publication celebrating its achievements and a sharp upturn in design and project management work for the cruise sector. The leading naval architecture and marine engineering company says that its core cruise ship workload has staged a spectacular comeback through 2022, following a significant slowdown during the height of Covid-19.

“Having weathered the pandemic, Foreship is re-energized for growth at a time when shelved refurbishment work is being revived and owners are once more in the market for new project work,” said Lauri Haavisto, Managing Director, Foreship. “This year, we have revitalized our US presence with a new management team overseeing owner relations and regional project management, while we also recently established an office in the UK to liaise directly with our customers’ local technical staff.”

Headquartered in Finland, Foreship now has nine offices worldwide, including one of either coast of the United States.

From its foundation, Haavisto said Foreship’s appeal lay both in its independence and its ability to offer a full range of services extending from the pre-contract stage, through design and construction (including third party reviews), to delivery. As its new publication reflected, cruise references have included some of the highest profile ships built in the last 20 years, and over 1200 ship conversions.

“Over that time we have amassed vast and unrivalled databases of weight and other statistics, and model test results, which have come to provide a specific edge in our ability to verify the feasibility of projects,” said Haavisto. Co-founders Markus Aarnio (Chief Naval Architect) and Marcus Höglund (Head of HR and Quality Management) also remain part of the senior management team driving Foreship forward, with both also strongly committed to passing on their knowledge and expertise to next generation professionals. 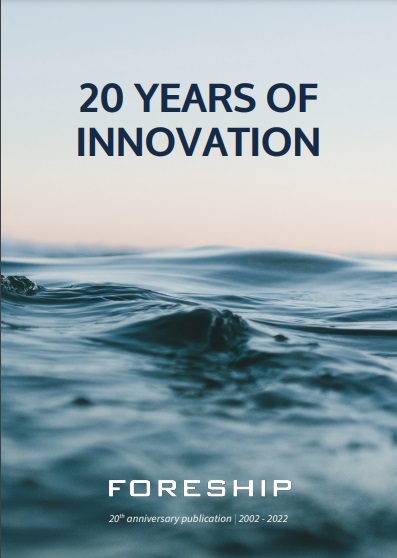 Driven by a mission to turn client ideas and ambitions into reality, Haavisto said a growing part of Foreship’s work is focused on alternative energy sources and the fuels shipping needs to meet its greenhouse gas obligations. Live projects include design and installation work for methanol, a feasibility study on installing systems to run ammonia as fuel, and offering a technical lead on hydrogen fuel cells.

“Today, shipping’s need for independent naval architecture, marine engineering and technical consultancy services is perhaps greater than ever before, given the challenge posed for our industry by decarbonization,” said Haavisto. “In 2022, we are convinced that our pioneering work in helping the cruise industry deploy lower carbon fuels, zero emission batteries, hydrogen fuel cells and shore power is creating the opportunity for Foreship to become a leading technology partner to shipping as a whole on decarbonization.”